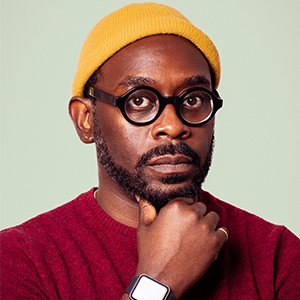 Chat in the Stacks: A Conversation with Temple Alum and Pulitzer Prize Winning Playwright James Ijames

We invite you to join us for the first Chat in the Stacks of the spring semester with special guest James Ijames, MFA ‘06. Ijames is a 2022 Pulitzer Prize recipient in the category of drama for his play Fat Ham, a reinvention of Hamlet that adapts Shakespeare’s drama onto a family barbecue in the American South.

James Ijames is a Pulitzer Prize winning playwright, a director, and an educator.

He is the 2011 F. Otto Haas Award for an Emerging Artist recipient and has two Barrymore Awards for Outstanding Direction of a Play. Ijames is a 2015 Pew Fellow for Playwriting, the 2015 winner of the Terrance McNally New Play Award for WHITE, the 2015 Kesselring Honorable Mention Prize winner for ....Miz Martha, a 2017 recipient of the Whiting Award, a 2019 Kesselring Prize for Kill Move Paradise, a 2020 and 2022 Steinberg Prize and the 2022 Pulitzer Prize in Drama recipient.

Ijames was a founding member of Orbiter 3, Philadelphia’s first playwright producing collective. He received a BA in drama from Morehouse College in Atlanta, GA and an MFA in acting from Temple University. Ijames is an Associate Professor of Theatre at Villanova University. He resides in South Philadelphia.

For 15 years running, the Libraries and the Faculty Senate Committee on the Status of Faculty of Color have co-hosted this engaging series of panels on timely topics, featuring faculty from across the university.