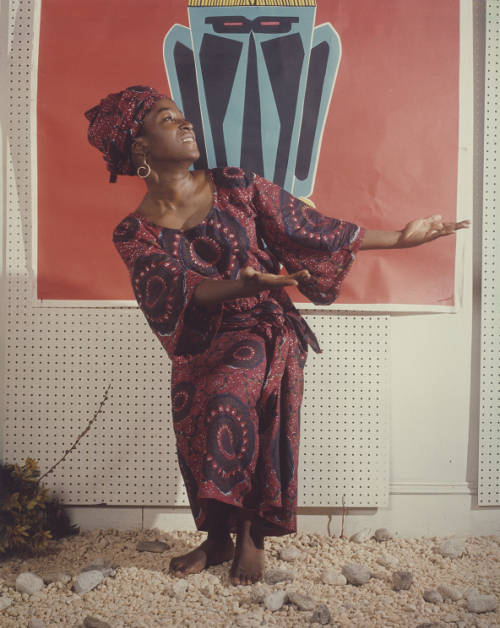 In celebration of the Arthur Hall Collection, recently donated to our Special Collections Research Center, join us for a conversation with Germaine Ingram and Nana Korantemaa Ayeboafo. We’ll hear about the Ile Ife Black Humanitarian Center, its history and impact, Arthur Hall, and more. Moderated by Dr. Brenda Dixon-Gottschild.

During the grand era of Ile Ife in North Philadelphia, Nana Korantemaa Ayeboafo was part of the Arthur Hall Afro-American Dance Ensemble for nearly two decades, performing across the United States. This included serving as Head Musician and Director of Concerts and Music Score for all major Arthur Hall productions. For the Dance Ensemble’s historic 1974 tour to Africa, Nana performed as lead singer and one of the lead dancers before royalty. In Ghana, she met her spiritual mother, Nana Okomfohene Akua Oparebea, the High Priestess of the ancient Nene Akonnedi Shrine. What followed was living in Ghana for 7 years as part of a close 21-year tutelage with Nana Okomfohene Akua Oparebea; this culminated in becoming the living representative of her spiritual mother via enstoolment in 2002 as the Akomfohene (King Shaman). As Nana Akomfohene Korantemaa Ayeboafo, she serves as President of the Asona Aberade Shrine, Inc. in North Philadelphia and Founder of StarSpirit International, Inc.. She provides leadership training to Kings, Queens, Akomfo (Shaman), and others—and performs spiritual readings (divination), traditional weddings, naming ceremonies, and other rites of passage ceremonies. Nana attributes her success to having two extraordinary mentors. This success includes Nana having been awarded a Leeway Foundation 2007 Transformation Award and the prestigious 2008 Pew Foundation Fellowship in the Arts—within the Folk and Traditional Art category. Also, through StarSpirit Press, Nana has published numerous books and released several CDs, which are available at www.StarSpirit.com. A 2017 book, AWAKENING Beyond Physicality: A Practical Guide for Aligning With The Higher Self And Divine Source -- Nana Asuo Gyebi’s Channeled Wisdom From The Realm of Spirit By Nana Akomfohene Korantemaa Ayeboafo, has also been the basis for numerous training workshops that will soon be available online.

Germaine Ingram has dedicated a half-century to work in law, public service, performing arts, and arts/cultural strategy and production. Her career in arts and culture, spanning more than 25 years, includes dance and vocal performance, choreography, oral history, writing, filmmaking, and arts/culture strategy at the intersection of art and social change. She creates evening-length, multi-disciplinary works that explore themes related to history, collective memory, and social justice; and designs, directs, and executes, for herself and other artists, arts/culture projects that illuminate community arts/cultural history.

Recent and ongoing projects include an exploration of the history and evolution of performative expressions of Yoruba-rooted ritual in Philadelphia since the mid-20th century, and a performance/archival project honoring the environment of collective genius in North Philadelphia that galvanized the careers of world-class jazz innovators in the 1950s-70s.

Her work has been supported by the NEA, The Pew Center for Arts & Humanities, the Independence, Leeway, Lomax Family, and Wyncote Foundations, and the Pennsylvania Councils on the Arts and the Humanities. Among other awards, she was a 2010 Pew Fellow in the Arts, Leeway Foundation Transformation awardee, and a 2014 resident fellow at the Sacatar Institute in Itaparica, Bahia, Brazil. For more than a decade she has regularly moderated public forums on a variety of civic issues under the auspices of the Penn Project on Civic Engagement.

She received her BA  in Political Science from Syracuse University (1968) and her JD from the University of Pennsylvania (1971). She was a Fellow in Law and Humanities at Harvard University (1974-75).

Brenda Dixon Gottschild is the author of Digging the Africanist Presence in American Performance: Dance and Other Contexts; Waltzing in the Dark: African American Vaudeville and Race Politics in the Swing Era (winner of the 2001 Congress on Research in Dance Award for Outstanding Scholarly Dance Publication); The Black Dancing Body–A Geography from Coon to Cool (winner, 2004 de la Torre Bueno prize for scholarly excellence in dance publication); and Joan Myers Brown and The Audacious Hope of the Black Ballerina–A Biohistory of American Performance.

Additional honors include the Congress on Research in Dance Award for Outstanding Leadership in Dance Research (2008); a Leeway Foundation Transformation Grant (2009); the International Association for Blacks in Dance Outstanding Scholar Award (2013); the Pennsylvania Legislative Black Caucus Civil Rights Award (2016); and a Pew Fellowship in the Arts (2017).

A self-described anti-racist cultural worker utilizing dance as her medium, she is a freelance writer, consultant, performer, and lecturer; a former consultant and writer for Dance Magazine; and Professor Emerita of dance studies, Temple University.  As an artist-scholar she coined the phrase, “choreography for the page,” to describe her embodied, subjunctive approach to research writing.