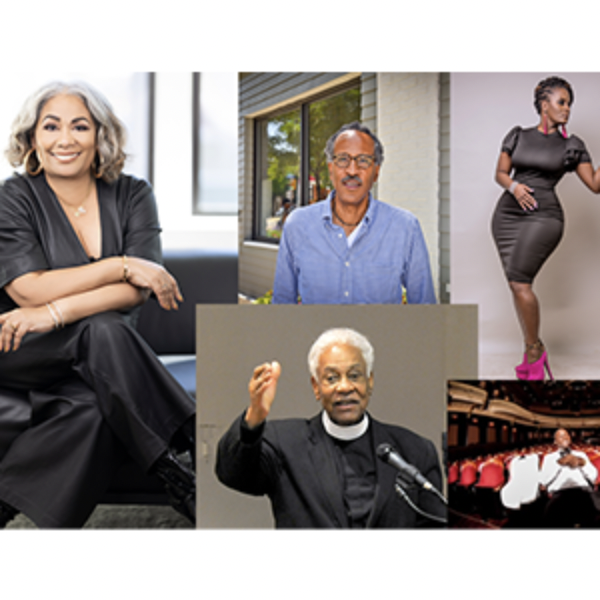 Join the Blockson Collection for a panel discussion and performance diving into the legacy and wide-ranging influence of the pioneering gospel artist and “Godmother of Rock & Roll," Sister Rosetta Tharpe.

Rosetta Nubin, better known as Sister Rosetta Tharpe, was a native of Cotton Plant, Arkansas. Despite being a gospel devotee, she was one of the primary architects of rock and roll. Tharpe’s unique, mezzo-soprano voice and her folksy gospel arrangements coupled with her pulsating swing electric guitar playing was a precursor of rock. Noted superstars Elvis Presley, Little Richard, and Johnny Cash all cited Tharpe as one of their primary influences.

Sister Rosetta lived in Yorktown, Philadelphia until her death in 1973, and there is an historical marker where she lived.

This program will be moderated by Dyana Williams, governor of the Philadelphia Chapter of the Recording Academy. The featured performer is Treena Ferebee, and panelists include Louis Massiah, Rev. Joseph Williams, Jr., and Dana Sorey.
"Sister Rosetta Tharpe astounded audiences with her guitar pyrotechnics and powerful soprano. America’s first gospel rock star, she paved the way for rock & roll to grip new audiences. Her heartfelt folksiness gave way to her roaring mastery of her trusted Gibson SG, which she wielded on a level that rivaled the best of her contemporaries."—The Rock and Roll Hall of Fame
"She helped shape modern popular music, was one of the few black female guitarists to ever find commercial success and the first artist to blend gospel with the secular. She inspired legends such as Jonny Cash and Little Richard, yet sadly, she seldom receives the recognition she so richly deserves in musical history."—The Heroine Collective
This program is presented in partnership with the Charles L. Blockson Collection of African-Americana and the African Diaspora at Penn State Special Collections Library.

About the speakers and performers:

Treena Ferebee, a Philadelphia native, was born into a musical family and made to sing before she could even speak. At the age of 19, Treena went on to tour all over the world as a background vocalist, and throughout her career has had the pleasure of sharing the stage with Stevie Wonder, Prince, India.Arie, and more. She has made television appearances on The Tonight Show with Jay Leno, The Late Show with David Letterman, BET’s 106th & Park, The Soul Train Music Awards, Showtime at the Apollo, and others.

As a solo artist, Treena, also known as TREE or QUEEN TREE, has featured several times in performances alongside Grammy and Emmy award-winning Jazz pianist, Robert Glasper. Annually, Treena has been a beloved performer for the longest running parade in the country: The Thanksgiving Day Parade in Philadelphia.

Louis Massiah is a documentary filmmaker and the founder of the Scribe Video Center in Philadelphia, a media arts center that provides production workshops to community groups and emerging independent media makers. As an educator and institution builder, Massiah has developed media production methodologies that assist first time makers in authoring their own stories, including the Precious Places Community History project, a collection of 107 collaboratively produced documentaries, and the Muslim Voices of Philadelphia community history project. Massiah’s documentaries include The Bombing of Osage Avenue, W.E.B. Du Bois—A Biography in Four Voices, and Cecil B. Moore, among others.

In addition to teaching at Scribe, Massiah has been a visiting professor and artist-in-residence at Swarthmore College, Princeton University’s Atelier, the Center for Experimental Ethnography at the University of Pennsylvania, Howard University, and City University of New York. He is a MacArthur Foundation Fellow (1996-2000).

Dana Soréy is a musician, arranger, composer, songwriter, and founder of C Bazz Entertainment and C Blake Studios. Shedding in garages with his brothers and the neighborhood musicians began the musical journey, and became the training ground for honing his craft towards becoming a consummate musician. One of Dana’s most cherished achievements was being a part of one of the most notable bands in gospel music history, Soundcheck, with Tye Tribbett and Greater Anointing (GA).

Dana continues to contribute a vibrant sound to gospel music by producing and co-writing with Gospel’s next generation. He has partnered with Monica Coates and EJ Gaines of Motown Gospel, and has co-written and produced with artists Gene Moore and Lexi, and Brian Courtney Wilson’s “Still” and “Sure As.”  As a result of God’s favor and Dana’s hard work and passion for music, he has acquired Grammy, Dove, and Stellar award nominations along the way.
Dyana Williams is an entertainment powerhouse who is a beloved advocate and authority in popular culture, especially Black music. The veteran award-winning on-air personality is a trailblazer in broadcasting, music activism, and celebrity media strategy. She's been a staple in radio since the 70s and has been a frequent commentator on the highly acclaimed TV One music series, UNSUNG. Fondly referred to as "The Mother of Black Music Month," Dyana helped establish June as Black Music Month (with Rock and Roll Hall of Fame inductee Kenny Gamble and broadcaster Ed Wright) and was recognized for her music activism in the White House by Presidents Clinton and George W. Bush.

Williams sits on the board of the Klein College of Media and Communication at Temple University, the National Museum of African American Music, and the Recording Academy (GRAMMY organization) Philadelphia Chapter, where she also serves as a past president.

Rev. Joseph Williams, Jr. (affectionately known as Rev. Joe) is an original member of the gospel singing quartet, the Sons of the Birds. The Sons of the Birds, who recorded an album and several singles for Peacock's Song Bird subsidiary in the 1960s, got their name because at one time, some of the singers were sons of members of the legendary Dixie Hummingbirds, who Rev. Joe also sang with. He is one of the founding members, along with Kenny Gamble, of the Black Music Association, which was founded over 30 years ago.