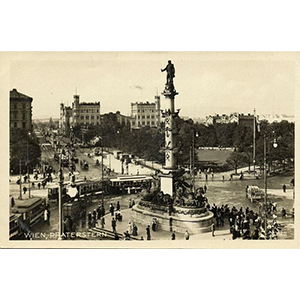 Beyond the Notes: The Final Waltz

This performance commemorates the 84th anniversary of the Kristallnacht (“Night of Broken Glass”) pogroms which occurred on November 9–10, 1938 throughout Austria, Germany, and the Sudetenland.

The rich tradition of Viennese Operetta reached a glorious apex in the late 1930s with its opulent waltzes, frothy comedic plots, and sentimental charm, becoming the dominant form of entertainment for all classes in Vienna and forging a nationalistic voice of Austrian identity. A melting pot of European elegance, bubbly farce, brash political humor, and exotic folklore from throughout the Austro-Hungarian Empire and beyond, Viennese Operetta showcased the artistic abilities of a thriving Jewish middle class in Vienna, who also provided the bulk of its audience.

With the approaching storm of Berlin’s Third Reich and its strict Nuremberg laws preventing Jews from participating in the theater, Viennese Operetta withered in the months following Hitler’s annexation of Austria, causing an end to one of the most thriving periods in musical theater history.

Join baritone, narrator, and Boyer College of Music faculty member Daniel Neer as he explores the clash between Viennese Operetta and the Anschluss with stories of Jewish (and non-Jewish) composers, librettists, and performers in the wake of Hitler’s invasion, accompanied by bittersweet music by some of the greatest composers, librettists, and performers of the era. In addition to standard hits by “the waltz king” Johann Strauss, there will also be favorites by Lehár, Kálmán, Benatzky, and some rarely heard songs by cabaret star Hermann Leopoldi and violin virtuoso Fritz Kreisler.

The Beyond the Notes series is presented in collaboration with Boyer College of Music and Dance.